On Friday, June 24th, PPT joined dozens of organizations in a call to green the Port Authority fleet. Kimmy Dihn, of PPT , says moving toward more environmentally friendly vehicles could help address public-health issues, too. “We are voicing the concern of how buses affect the public health of pedestrians, cyclists and public-transportation riders.”

Warwick Powell, of environmental group 350 Pittsburgh, says greening the bus fleet could make Pittsburgh a climate-change leader. He also says this is a great time to do so, given all the local support, including the arrival of solar-energy giant, SolarCity, to the Pittsburgh market.

“While air quality in Pittsburgh has improved over the last several decades,” says Rachel Filippini, of Group Against Smog and Pollution, or GASP. “We continue to have some of the worst air pollution in the country, especially in terms of fine-particulate matter. One source of these emissions is Port Authority buses.”

News coverage of the event:

PPT is excited to join up with Bike Pittsburgh and Pittsburgh Community Reinvestment Group to connect transportation justice and social justice advocates and discuss current struggles for mobility and access.

Speakers will share their challenges with mobility and access and we will all discuss ideas for how to achieve more equitable transportation in our region.

Together we can work together to ensure that Pittsburgh has safe, equitable, and affordable transportation systems.

On Friday May 27th, residents and riders from all over the county came together to encourage Port Authority to approve staff recommendations for service extensions.

The proposal includes adding weekend service the 89 Garfield and extending the 79 along Mount Carmel Road in Penn Hills. 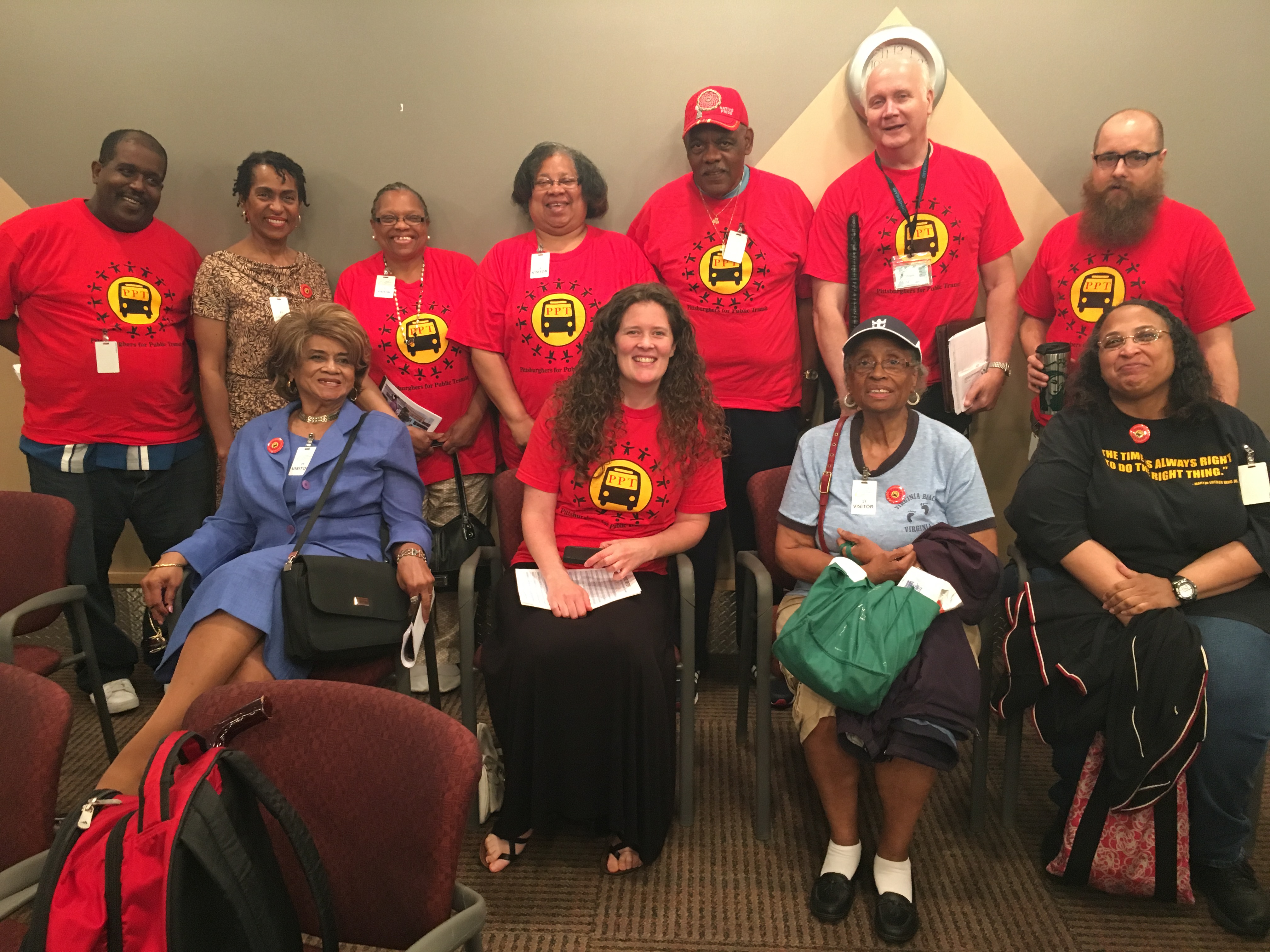 Annie McGowan, resident of Garfield said: “Me and my mom have to depend on someone else to take us to church. A lot of senior citizens can’t get out for church activities, shopping, and meeting family and friends. Now we’ll be able to hop on the bus!”

Although we are excited to celebrate these service extensions we are committed to pushing Port Authority to restore service to all communities in need as well as the fight for more transit funding.

“The fact the kids can’t get to a college in their own neighborhood, that’s just a crime,” said Fran Lange of Ross, a member of Buses for Perry Highway. “There are a lot of senior citizens that would love to go to the library, but you can’t get there.” 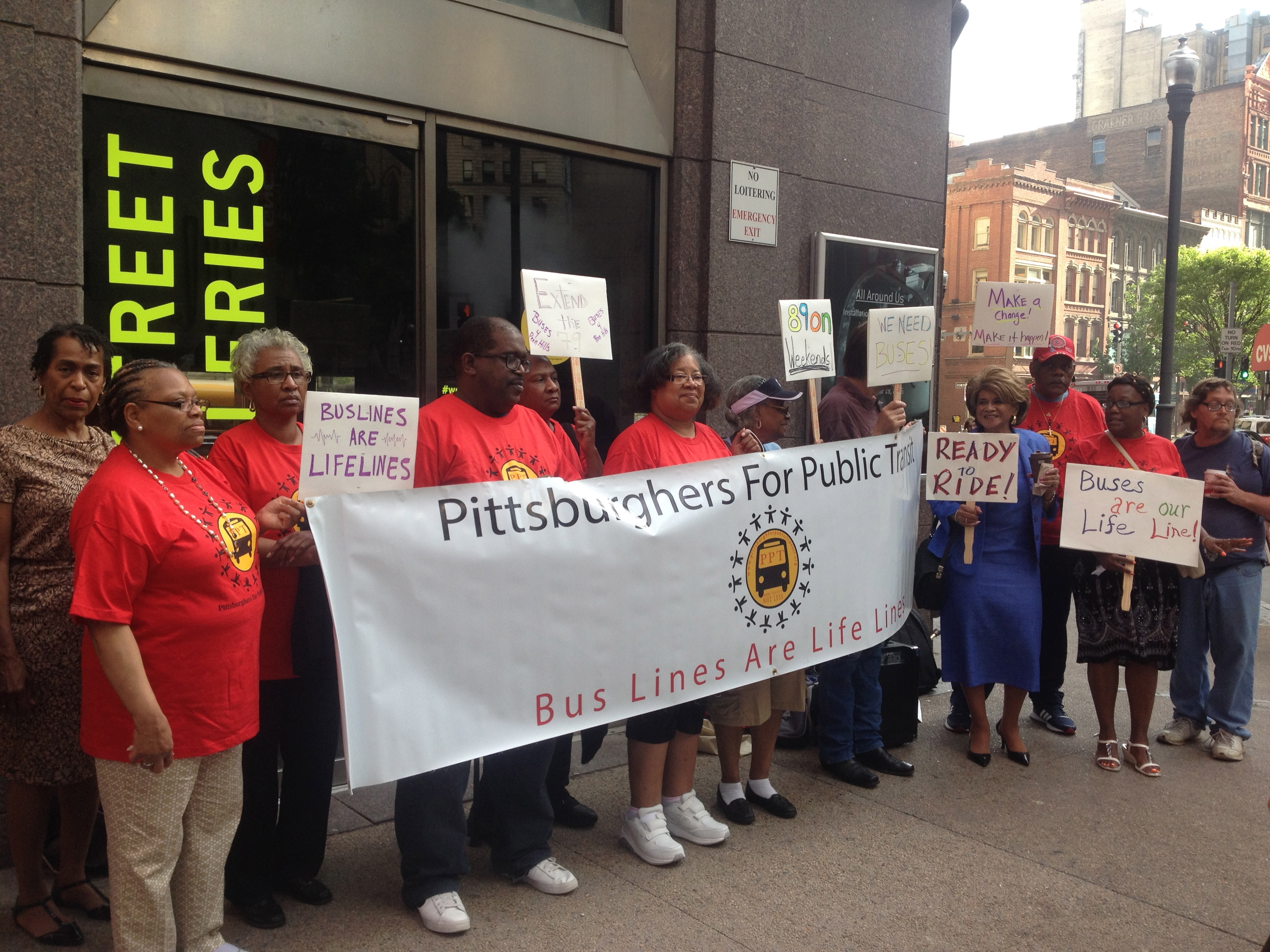 Thank you to everyone who came out and addressed the board or stood with us in support!

Media coverage of the event:

Port Authority’s board approved transit-oriented development guidelines as well as changes  to their fare policy today.

We are really excited that riders in Zone 2 will soon be paying $2.50! However, we are still concerned about the elimination of paper transfers and the implementation of a cash surcharge without the proper infrastructure that makes ConnectCards easily accessible and re-loadable.

We are also concerned about the disproportionate affect these changes might have on low-income riders.

PPT supports that Port Authority has approved TOD guidelines but insists that affordable housing be a requirement in any development near good transit.

April has been filled with awesome events!

PPT joined the Women and Girls Foundation in support of their Equal Pay Day Rally. We heard from ATU member Sue Scanlon, who spoke about how her membership in a union has given her access to wages equal to her male coworkers.

We also joined workers in solidarity at the Fight for $15
rally! Hundreds of community members, allies, and workers came together to say we all deserve a living wage and union rights.

Thank you to everyone who came out and stood with us! Yesterday, PPT celebrated Transit Worker Appreciation Day by visiting the Manchester Main Shop, The Rail Center, and distributing candy and thank you cards to riders in Downtown and Oakland to give to their drivers.

Thank you to all of the volunteers who made TWAD 2016 possible. Special thanks those who volunteered: UNITE HERE casino workers, Mel Packer, Jonah McAllister Erickson, Earl Pearson, Helen Gerhardt, Deepti Ramadoss, Fatema Juma, and Hannah Gerbe of Fight Back Pittsburgh.

Here are some great pictures and news coverage of the day: Port Authority is currently working on their transit oriented development (TOD) guidelines. Pittsburghers for Public Transit is encouraging transit and housing advocates to address the board during the public comment period of their board meeting on March 18th, 930 am, 345 Sixth Ave, 5th floor.
You can sign up here by March 11 at 5 pm. Or email info@pittsburghforpublictransit.org or call 412-216-9659.
Here are PPT’s initial talking points. We will have updates on this next week:
We would like to commend the agency for developing transit oriented development (TOD) guidelines. We also want to commend them for including affordable housing as a fundamental principle for equitable TOD. Riders and residents are paying close attention to this issue and expect the guidelines for affordable housing in TOD to be robust and enforceable. The Port Authority–in consultation with the communities, developers, municipalities, authorities, departments–must ensure that adequate affordable housing is near the most frequent and accessible transit service.
To date, TOD in our region has not included adequate affordable housing. For example, the East Liberty Transit Center. The Eastside Bond apartments, built right along the busway, include 360 units. Not one of them is affordable. Rentals start at 1100 for a studio and go up to 3600 for a 2 bedroom. East Liberty Place South is part of this TOD, but that is only 61 affordable units. And as property values go up in this neighborhood, long-time residents (many of whom are reliant on transit) need to be protected from displacement.
The Port Authority is currently involved in three developments along the T in the South Hills (Dormont, Castle Shannon, and South Hills Village), and not one of these plans includes affordable housing. PPT insists that all TOD should include affordable housing. This is not only good for communities but also good for the transit agency, who can count on strong ridership from these residents. We cannot allow folks to be displaced to communities with little to no transit service. On Friday 2/26, Pittsburghers for Public Transit joined other groups to call for transparency and accountability on the part of Port Authority in regards to the killing of Bruce Kelley, Jr. We specifically asked for an investigation into whether or not the use of the police dog was justified. For PPT’s full statement click here.

Media coverage of the event:

People Upset Over Police Shooting Of Man Who Stabbed K-9

During their meeting on Feb 16, Allegheny County Council unanimously approved a motion (sponsored by Councilwoman Denise Ranalli-Russell) urging the Port Authority to reinstate weekend service on the 89 Garfield bus. (for full text of motion, see below) Residents began a robust campaign for service this fall, with support from the Bloomfield Garfield Corporation and Pittsburghers for Public Transit.

Last night, the council heard from Garfield residents about the hardships they have faced ever since the weekend service was cut in 2011. Annie McGowan shared how she and her mother are unable to go to church events on the weekends. Myval Johnson expressed dismay that she cannot go shopping at the new Aldi grocery store on Saturdays, and Donna Terry shared her difficulties getting up to her mother’s home at N Aiken Court to take care of her. Aggie Brose, an advocate for the community and Deputy Director of the Bloomfield Garfield Corporation, asked the councilmembers to just imagine what their lives would be like without a car and Molly Nichols, from Pittsburghers for Public Transit, discussed the community campaign for service that has generated over 400 requests for service—all submitted to Port Authority.

Many councilmembers spoke in support. Mr. Ellenbogen shared how he walked that hill every day for 4 years to get to high school at Peabody. Mr. Futules said “people’s lives depend on the bus.” Mr. Palmiere expressed the value of advocating for extended bus service, and Mr. Walton highlighted the importance of fixing the “prior damage” that was done to communities during the cuts.
The Garfield bus campaign applauds the council for unanimously passing this motion. More support from elected officials gets us closer to ensuring that all communities get the transit service they need. Pittsburghers for Public Transit is deeply concerned and upset about the killing of Bruce Kelley, Jr. by Port Authority police. Our thoughts are with his family and friends at this difficult time. We are also deeply concerned about the use of the police dog on a person, both in this instance and in all instances.

We understand the District Attorney, Steven Zappala, is leading an investigation into whether or not the use of deadly force was justified. We also think the investigation should include whether or not the use of the police dog was justified. We agree with the hundreds of residents, including some journalists, who contend that the Port Authority police should have taken different steps to handle this situation. And each of these officers should be better trained to interact with individuals who suffer from mental illness.

Using police dogs to attack people, given the history of the practice—particularly against African Americans—and unpredictability of the outcomes, should never be an option for the police.  The practice is inhumane for both the dog and the person being attacked. It is illogical to expect a person not to defend oneself when being mauled by a dog. Releasing the dog puts both the dog and the person in harm’s way.

The death of Bruce Kelley, Jr is part of a national pattern where individuals, and disproportionately African Americans, Latinos, and Native Americans, are killed in encounters with the police, where their death was clearly avoidable. We expect the Port Authority police to undergo training that addresses the impact of implicit bias on police behavior. This concern also came up in response to the Wood St T station arrests on December 16, 2015.