Hope you are all enjoying the 44! We want to get a good idea of how having your bus back has affected your life and the lives of your community members. Please take a moment to fill out this survey and share it with your neighbors!

We got the buses back!

Residents from Garfield came out to speak about the need for weekend service on the 89 at the February 26th Port Authority board meeting. Baldwin residents came out in support of Garfield’s fight for service and to highlight how adequate transit has improved the lives of people in their community. Terry Breisinger and Dennis Donahoe of Baldwin and Annie McGowan, Mary Johnson, and Donna Lee Terry came together to speak to the Port Authority board about the need for solidarity between communities.

After being stuck in a transit desert for years, residents celebrated their inaugural rides into town this morning! Dozens of Baldwin community members, along with Pittsburghers for Public Transit, rode the 44 Knoxville to downtown Pittsburgh. Even more supporters joined them for a celebratory rally at 6th Ave and Wood St.

Riders spoke about all the work they had done in the past year to advocate for service in their communities, and they thanked Port Authority and elected officials for listening to their concerns. Dennis Donahoe, resident at Churchview Garden Apartments in Baldwin borough, was thrilled to get the service back and shared his pride for everyone who came together to make this happen.

Coverage of our celebratory rally! 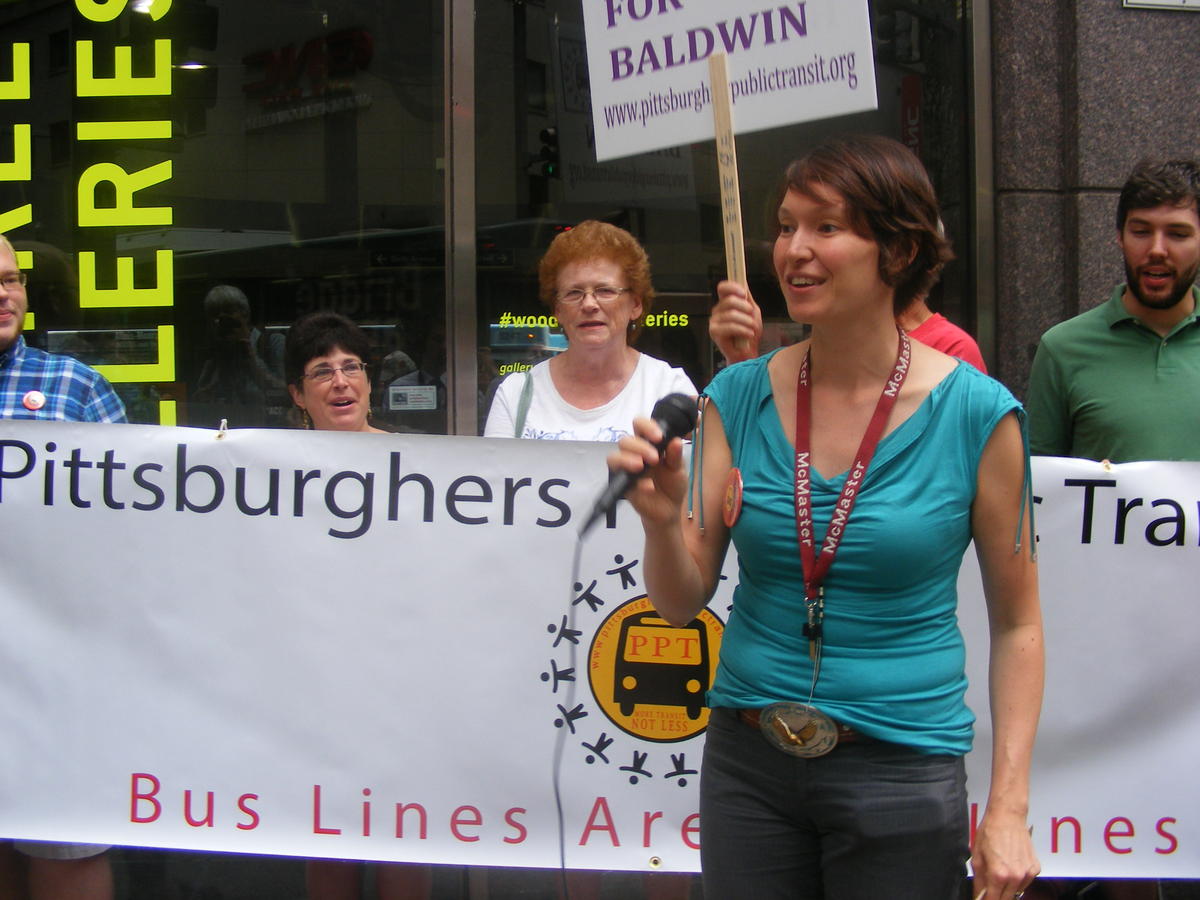 Laura Wiens, emcee of the rally, celebrates restoration of PAT service to parts of Baldwin and Groveton

Jennifer and Jon Herron, both 30, stand by a new bus stop across from their home in Baldwin Borough on Thursday, Aug. 6, 2015. Jennifer Herron lives in Baldwin and works Downtown – she carpools but soon will take the new Port Authority 44 Knoxville, which will stop right by her house.

Community organizer for Pittsburghers for Public Transit Molly Nichols of Regent Square pushes her bike up a hill in Baldwin Borough to one of the new bus stops that will be available to the area on Thursday, Aug. 6, 2015. Nichols organized the community to work to regain some bus service that was eliminated in previous years.

Since May 2014, Baldwin residents–in collaboration with Pittsburghers for Public Transit–have been working on a campaign to restore much needed bus service to their community.

We will have our next Buses for Baldwin Community Meeting. We have been working since May to get transit service into the community. This meeting is a chance for residents to: a) get updates on the campaign, b) learn about more ways to get involved, and c) hear from elected officials who have been supporting our efforts.

Here are a few updates from the campaign that have happened up until now:

·         We presented our cause at the  monthly  Port Authority Board meetings

We would also like to hear thoughts from you regarding how we can most effectively continue this Baldwin for Buses Campaign. We feel that great strides have been made and we need continued support and action to reach our Goal of Bus Service.

We have made a strong case to the Port Authority, and they are in the process of determining where they can add service next year. Now is a crucial time to make sure they know what our community needs!

Thank You so much for your past support and work !!  Join us at the meeting so we can get this job DONE !!

Please click on this link for a flier, and consider sharing it with your neighbors or posting at a local business. We hope to see you on the 23rd!

Ways to Get Involved:

While PPT affirms that our public transit system should meet the needs of every community in Allegheny County, we began this campaign to restore service in Baldwin for the following reasons:

What the campaign has accomplished

From May 1 to July 9, Pittsburghers for Public Transit (PPT) conducted a survey to understand the transit needs in North Baldwin, since the 50 Spencer route was cut in 2011. The survey was distributed online, door-to-door, and at churches and organizations throughout the community. Here are the preliminary results:

➢ 495 residents have completed the survey

➢ 479 participants (97%) indicate that transit is important in their community

➢ 429 participants (87%) assert they will use transit service if it is restored (for work, shopping, health care, etc.)

➢ The majority would ride 6-9 am and 3-6 pm; some indicated a need for mid-day, evening, and weekend service.

If you are a resident of Baldwin, Brentwood, or Carrick and have not completed the survey, you can do so here:

Pittsburghers for Public Transit is asking for your help in assessing the need for mass transit in the North Baldwin, Brentwood, and Carrick communities.  We are well aware of the lack of mass transit in your community and ask that you take a few minutes to fill out the following survey so we may better understand the needs of this community and communicate them to decision-makers. Please encourage your neighbors to fill out the survey as well!  Knowing what the community’s needs are is the first step towards restoring and improving transit service and access.