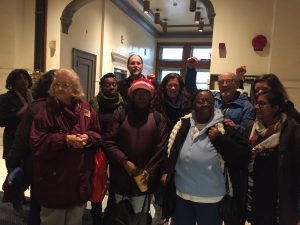 On Tuesday, January 10th, the city Planning Commission denied LG Realty approval of their preliminary land development plans for the Penn Plaza site. This vote was delayed from a previous commission hearing in December, during which hundreds of community members, residents, and supporters came out to testify about the massive displacement, lack of community process, and harm inflicted by LG Realty.

Let’s send a note of thanks to the planning commission to let them know that they have the support of the community.

Pittsburghers for Public Transit, along with other organizations including Homes for All, Northside Coalition for Fair Housing, and the Enright Park Association, highlighted the developers’ blatant disregard for community process and the well-being of the residents, many of whom still have not found housing and face the imminent threat of eviction. They face the possibility of being displaced from a neighborhood in which they have lived and thrived for decades.

The proposed plan included up to four hundred units of market rate housing and a Whole Foods. The developer also misrepresented the size and design of the park and open space. Additionally, the only open, public meeting that was held was scheduled the night before the hearing in December, and no effort was made to speak about any part of the plans other than the design of the park.

The developer faced massive push-back both at that meeting and at the initial hearing the next day. It was clear to all in the room that the development was not in the interest of the residents or the community, and that we care what happens to our neighborhood. We care to make sure that Pittsburgh does not ignore the people of this city in its scramble for shinier, fancier developments.

The decision showed us that we are capable of causing change when we come together and stand in solidarity. People do have power, and we must remember more than ever that we need to act together to wield it.

The developers are currently in the process of appealing the decision, so the fight is not over yet! Let us celebrate our victories, but continue to fight harder for our communities, our neighbors, our friends. We’ll need it more than ever, in this fight, and for the many more in the future. Remember to send the note of thanks!

🎉TRANSIT RIDERS GOT THE GOODS!🎉 Rider advocacy pushed the Senate to pass $30B for transit in the #AmericanRescuePlan! #SaveTransit!Lots of work left to do toward progressive working-class change, but lets take a moment to celebrate. #TransitIsEssentialwww.nytimes.com/2021/03/06/us/politics/biden-stimulus-plan.html?action=click&module=Spotlight&pgt...
... See MoreSee Less

The chamber approved the package after a grueling marathon of amendment votes and last-ditch negotiations. The measure must now clear the House a second time.

“The fare consultant process has been going on for two years,” said Laura Wiens, Executive Director of Pittsburghers for Public Transit. “We’re hopeful that the delay is to have a considered and really equitable plan that they’re going to be rolling out.” www.wesa.fm/post/don-t-ask-don-t-get-port-authority-plans-bright-future#stream/0
... See MoreSee Less

The Port Authority of Allegheny County is on a quest to build a transit system that is equitable, sustainable and improves people’s lives . A new round of

“Whether we’re talking about scooters or AVs, anytime that these new technologies diminish the role of transit, that’s bad news all around.” We need public agencies to prioritize public transit instead of for-profit micro-mobility. usa.streetsblog.org/2021/03/01/why-the-new-mobility-revolution-leaves-seniors-behind/
... See MoreSee Less

Why the New Mobility Revolution Leaves Seniors Behind

Elders are being left out of the new mobility revolution — and will be more so by the time autonomous vehicles come around, a new study argues.

The key word here: convenience. Utilizing technology in this way won’t revolutionize public transit but it will make life a little bit simpler.