In response to concerns from advocates, Port Authority delays implementation of proof of payment on the T. 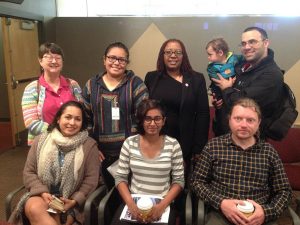 Representatives from Casa San Jose, Alliance for Police Accountability, Pghers for Public Transit, the Thomas Merton Center, and the Pennsylvania Interfaith Impact Network at the Port Authority board meeting to share concerns about the proof of payment policy.

For our request to the agency, see below:

Pittsburghers for Public Transit, Casa San Jose, the Thomas Merton Center, and the Alliance for Police Accountability are asking the Port Authority to delay implementing proof of payment on the T, slated to begin July 1st. This request is based on concerns about lack of public process and inadequate information about the policy and its impact on riders.  Text of letter is below:

Jeff Letwin, Chairman of the Board

We are writing to ask the Port Authority to delay the implementation of a proof of payment system on the light rail, which is slated to begin July 1st, 2017. This change was approved by the Port Authority board as part of the fare policy in the summer of 2016. However, the only information about this change that was available to riders during the public hearing was as follows: “A second phase that would allow the Authority’s light rail to also switch to a pay-on-enter and cashless proof-of-payment system would begin in the second half of 2017.”

At the time, Pittsburghers for Public Transit shared concerns about the proof of payment by providing the following statement: “Proof of payment on the rail involves having more police on the trains, and we are very concerned about how the policing and enforcement will happen. Measures would need to be in place to ensure that the enforcement does not target or profile certain routes or populations of riders. We know this has been an issue in other cities, and expect a detailed and thorough plan—along with extensive training for the police (including implicit bias training)—to make sure that does not happen in Pittsburgh.”

In the past couple months, various organizations have publicly shared concerns and asked questions, and we have yet to receive sufficient information about this policy, how it will be implemented and enforced, and the impact it will have on riders and the public at large.

The change is going into effect in just 2 months, and all we currently know is this:

We have been told there are plans for a public education campaign, but the change is happening in just 2 months; this is not nearly enough time for the policies to be adequately vetted by the public. The agency will not be able to adequately acknowledge concerns from riders, especially about the enforcement, penalties, and increased policing.

We know proof of payment systems are on the rise throughout the country, especially for how they improve the operations of the system by allowing riders to board more quickly. There are also many instances of racial profiling, and there are many questions about the relationship between fare inspectors and immigration and customs enforcement. Public transit is not a border checkpoint. We have looked at other agencies across the country, and the San Francisco MTA stands out as a model Pittsburgh could aim to replicate. The agency underwent an extensive process to determine their policy and came up with the following.

They adopted local ordinances for establishing administrative penalties for transit violations. This allowed them to de-criminalize fare evasion. While we understand that riders need to understand there will be some consequence if they do not pay their fare, should that consequence include getting brought into the criminal justice system and facing possible jail time? In San Francisco, their ultimate goal is increasing ridership and making the system run more smoothly. They have un-armed fare inspectors who check for fare evasion. If someone has failed to pay, they escort them off the bus or train and show them how to pay their fare. Or they may issue a ticket. If this ticket is not paid, a third-party vendor is assigned to collect the debt. The processing overall mirrors that of parking violations. No one ends up in jail for not paying a transit fare.

The SFMTA have shared many benefits to decriminalization including: reducing the burden on the criminal court system, more convenient and flexible payment, and protest options. In addition, the revenue is retained by the issuing agency. Their policy also does not allow fare inspectors to share the names or addresses of those who received tickets with any other agency, including ICE. And the fare inspectors are trained in de-escalation to avoid un-needed conflict with riders.

The Port Authority and the public are not ready for this change to occur in just 2 months. There should be more time for sharing the policies, refining them according to public input, and ensuring that the system in place works best for the transit system and the community overall.

Our requests are the following: