On Saturday, October 8th, over 75 residents from Garfield and Penn Hills, and supporters from across Pittsburgh, filled the Kelly Strayhorn theater lobby to celebrate the success of their campaigns for increased bus service! After a year of community meetings, petitions, rallies, and testimonies before the Port Authority Board and elected officials, residents now have extended bus service on route 79 in Penn Hills and weekend service on the 89 in Garfield. The enthusiasm and joy were palpable in the speeches and mood of the crowd.

Annie McGowan, a resident leader from Garfield, said in her fiery speech, “It’s just wonderful to see a community come together. It’s wonderful to see a community that doesn’t give up at all no matter what you say, what you do. Because we know what it’s like to walk those hills. We know what it’s like when we have to count on somebody to take us to church and then bring us back home.”

Tony Williams, from Lincoln Park in Penn Hills, shared how challenging it is to get around without a car. He encouraged residents to ride the extended service and help get the word out! 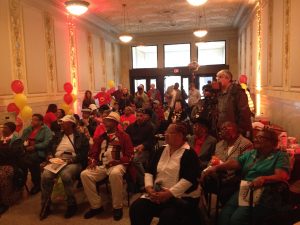 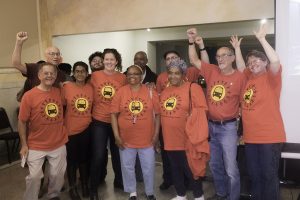 Leaders from both the campaigns shared their experiences mobilizing neighbors and explained what a difference this extended service would make in their lives. State Representative Ed Gainey commended the hard work of community members and encouraged residents to continue to unite for better public transit! Aggie Brose, from the Bloomfield Garfield Corporation, shared how this campaign is a stepping stone for continued strides towards creating equitable communities. And Molly Nichols, from Pittsburghers for Public Transit, called on the need for more funding for public transit, especially from major corporations and institutions. She also shared the importance of fighting for affordable housing near frequent transit.

Everyone thanked the Port Authority for listening to their requests but also acknowledged the high level of demand in Allegheny County for improved transit service. Speakers emphasized the need for communities to support each other, highlighting the sense of unity and strength that they had felt in their campaigns. Many expressed the desire to stay and fight for those who still have limited or no access to public transit. McGowan closed the event saying, “I just want you to remember the ones that don’t have bus service, [hundreds of routes] were discontinued. We got to remember them. We got to stand with them. We got to do for them. Remember them please…And let’s move forward!”

These campaigns were led by the residents of Garfield and Penn Hills, and supported by Pittsburghers for Public Transit, the Bloomfield Garfield Corporation, Lincoln Park Community Center, and the Penn Hills NAACP.