PPT co-sponsored a rally and march this past Saturday Feb 4 to challenge Uber and their relationship to our City. While PPT recognizes the value of on-demand transportation service in our region, we want to challenge Uber’s business model, which skirts regulations and restricts workers’ rights to organize. We are also concerned about the partnership Uber has with the Mayor’s administration. We are calling for a publicly operated on-demand transportation service that is equitable, accessible, and accountable to the communities it serves.

Thanks to everyone who came out!

Here is coverage from the rally, and see below the photos for more information: 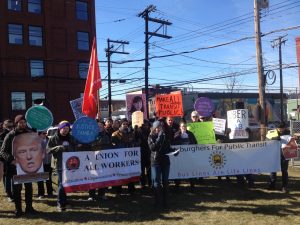 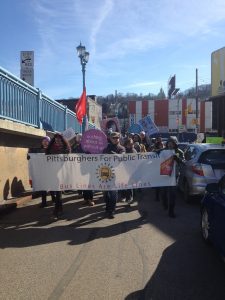 WHERE: 2901 Liberty Ave in the Strip District (Denny Park)

Pittsburgh—On Saturday, Pittsburghers will rally to celebrate that our opposition to Uber’s collaboration with the Trump regime led to CEO Travis Kalanick’s resignation from the Economic Advisory Council. Uber still has a long way to go. We demand that they repudiate all of Trump’s immoral and hateful policies, support campaigns to oppose anti-sanctuary bills in Harrisburg, and stop restricting workers’ rights to organize. Pittsburghers will also call on Mayor Peduto to reject Uber as a partner to this city, and to evaluate other on-demand transportation options that would allow for a more accountable and publicly-controlled expansion of our transit system.

We acknowledge that Uber has publicly opposed the immigration ban and taken some steps to support their immigrant workforce, and we view this only as a reaction to bad press due to massive public outcry. Immigrants, legal residents, and refugees were detained and deported, without a single comment from Uber—who waited to respond only after consumers took action against them. “All companies on Trump’s economic advisory board should understand that we see silence as tacit support of Trump’s actions,” says Erin Kramer of One Pennsylvania. “While we commend Uber’s resignation, we expect them to ACTUALLY support the immigrant workforce by treating their workers right and becoming a responsible community actor.”

Uber has repeatedly defied municipal, state, and national laws meant to protect the public interest. Across the globe, the company has fought any attempt to hold it to account to basic standards of safety and liability regulations, labor rights, environmental sustainability, data transparency, and compliance with civil rights laws such as the Americans With Disabilities Act. We are fundamentally opposed to Uber’s business model, which skirts regulations and refuses to recognize workers as employees with the right to unionize. On top of that, “Uber’s development of autonomous vehicles with no commitment to a just transition for workers will displace hundreds of thousands of workers across our economy,” says Tom Conroy with Amalgamated Transit Union Local 85.

In Pittsburgh, Mayor Peduto has steered our City government into a public-private partnership to test autonomous vehicles without an open, thorough assessment of needs and the potential impacts on our public safety, transportation systems, and economy. He has pledged public resources and project opportunities without a transparent public selection process, offering unprecedented access to Uber of our public assets—including public transit busways—in preparation for the Smart Cities application. The City and Uber have also failed to adequately involve Four Mile Run residents in the planning of the autonomous vehicle shuttle loop that would bisect their Hazelwood community.

“We need public transportation systems that are equitable, accessible, and accountable to the communities they serve,” said Chandana Cherukupalli, organizer with Pittsburghers for Public Transit. “Our elected leaders should be pursuing opportunities for publicly operated on-demand transit service, which creates union jobs and is affordable to all residents.”

Emily Hannon, with the Party for Socialism and Liberation, asserts, “We must demand that local politicians focus their energies on the public, not partnerships with greedy corporations.”

“Pittsburgh stands in solidarity with Muslims, immigrants, and our sisters and brothers in the labor movement. Any corporation that collaborates with Trump and his harmful policies should be held responsible,” said Christina Castillo, with the Thomas Merton Center.