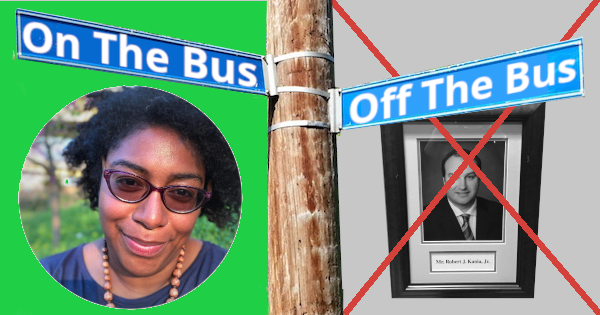 In an open letter co-signed by 13 regional and statewide organizations and elected officials, Pittsburghers for Public Transit (PPT) is calling on Governor Tom Wolf to appoint rider advocate Heather McClain to the expired Port Authority Board seat currently occupied by Robert Kania.

PPT believes that the demographics of the Port Authority board should reflect the demographics of the riders, and that board members should have a deep understanding of the importance of transit in advancing equity and economic development. Moreover, effective board members must be regular users of the transit system which they oversee, in order to understand and uplift the grassroots expertise of fellow riders and operators.

“In her role as the Community Initiatives Manager for Healthy Ride, Heather McClain has been a tireless advocate for increasing mobility and access, particularly for marginalized communities.” says Laura Wiens, Executive Director of Pittsburghers for Public Transit. “She is a long-time, regular transit rider, and is a leader in advancing equitable, inclusive growth in the Beechview community. We believe that Ms. McClain is an ideal steward of this vital community asset.”

Current Port Authority Board member Mr. Kania is the subject of a campaign finance complaint recently filed by the DC-based nonprofit transparency organization Campaign for Accountability, for failing to register with the state around his political activity and report campaign finances. Moreover, the term of his appointment by Republican former Governor Corbett expired in 2017. WESA broke this story back in November and covered it again in December. This week the Post Gazette and WESA took an even deeper dive into Kania’s grossly inappropriate behavior.

Alice Huling, Council for the Campaign for Accountability – the DC-based non-profit that filed the Complaint against Kania, commented; “Pittsburghers are right to question whether Robert Kania is fit to serve on the board of the Port Authority of Allegheny County.  Mr. Kania attempted to unfairly influence an election outcome by operating a secret campaign; he tried to dupe voters and appears to have run afoul of Pennsylvania’s campaign finance laws. Mr. Kania should be held accountable for any campaign finance violations, and Governor Wolf should seriously consider whether someone who behaved in this way is fit to serve as a public official in Allegheny County.”

PPT is calling on Port Authority transit riders to write to Governor Wolf and encourage him to appoint Heather McClain to the Port Authority Board of Directors. Riders can send their letter here.

When we fight? WE WIN!🚨BREAKING NEWS🚨🗣We Did It‼️Both of our ballot initiatives will be on the upcoming primary ballot 🎉Join us tonight at our community meeting (link in bio) for more details in addition to our conversation about Judicial Gerrymandering.🗣Ain’t no power like the power of the people ‘cause the power of the people don’t stop‼️ A HUGE THANK YOU TO ALL OF OUR VOLUNTEERS AND FINANCIAL SUPPORTERS! WE COULD NOT HAVE DONE IT WITHOUT YOU!! #StopSolitary #PassBreonnasLaw
... See MoreSee Less

Humbled to organize with so many incredible people. Together we can win real transit improvements that improve our lives.
... See MoreSee Less

Our Transit Workers are heroes. Fight for them always, and remember their legacy. www.wpxi.com/news/top-stories/4th-port-authority-employee-dies-covid-19/OA2LPXHNEZGPDCBIYNRFVHH4JY/
... See MoreSee Less

Another Port Authority of Allegheny County employee has died from the coronavirus, making it four total since the pandemic began.