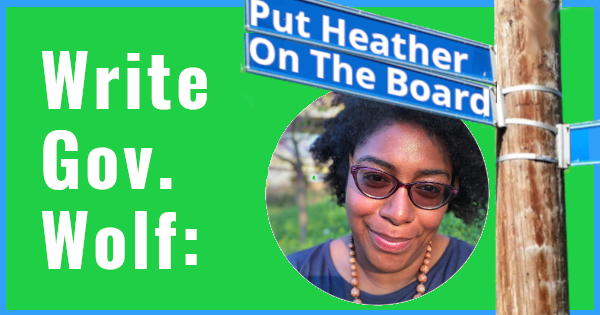 Riders succeed in removing controversial member of Port Authority Board, continue calling for Heather McClain to be appointed in his place, and for rider involvement in board selection process

Riders were able to claim a victory today with Gov. Wolf’s removal of a controversial member of the Port Authority Board! This decision came just mere hours after Pittsburghers for Public Transit released an open letter co-signed by more than a dozen regional and statewide organizations and elected officials, and after launching a public letter writing campaign for riders to support the position. But the fight isn’t over!

Around midday, Governor Wolf’s office issued a press statement removing Robert Kania from the Board seat and naming an interim member. The press statement says that his office will work with “stakeholders and legislators” to identify someone to fill the seat permanently.

Pittsburghers for Public Transit continues to call for the appointment of rider advocate Heather McClain to the position, and encourages others to voice their support by sending letters to Governor Wolf. More than 100 riders have taken action to contact Governor Wolf since the campaign launched this morning.

Laura Wiens, Executive Director of Pittsburghers for Public Transit, says: “While we appreciate that Governor Wolf has heeded transit riders’ call in removing Kania from the board, we have yet to hear from his office. Transit riders and transit workers are key stakeholders in this vital public asset and must have a say in the appointment process.”

Senior Communications Associate Hayley Richardson of TransitCenter added, “Decision-making at the Port Authority should be informed by the lived experience of those who use it. Governor Wolf should seize the opportunity to appoint Heather McClain, a bonafide transit expert and rider advocate, to the Port Authority’s Board.”

We stand with our family at APALA Pittsburgh condemning the anti-Asian violence that's grown in Pittsburgh and our nation since the pandemic's start. We struggle in #solidarity until all have the freedom to move. ✊❤️
... See MoreSee Less

WASHINGTON — As part of the $1.9 trillion COVID-19 relief bill passed by the U.S. House early Saturday, the Pittsburgh region will receive about...

Welcome! You are invited to join a meeting: PPT Monthly Meeting // March. After registering, you will receive a confirmation email about joining the meeting.

All are welcome to join us for our March General Meeting. We'll be holding it over Zoom, so attendees can join via computer or phone. - Wednesday. 3.10 // via Zoom RSVP here: us02web.zoom.us/m...

Do you think Port Authority should lower fares for low-income riders during the COVID crisis?If yes, and if you want to push for change with us, take our survey today: www.pittsburghforpublictransit.org/but-we-still-need-transit-ppts-low-income-fare-survey/
... See MoreSee Less